I get a call on September 5th from a man out of state. After coming back into the country from an overseas vacation, he is notified by TSA that he has an outstanding felony warrant. For failing to register as a sex offender. He is confused. He got in trouble many years ago as a juvenile. He was 13 years old. His family hired a family law attorney who encouraged him to plead guilty. So he did. He was never told he had to register as a sex offender. He trusted his family law attorney, who did not understand the criminal justice system very well. He successfully completed his juvenile probation; in fact, he was discharged early from probation, having completed all the requirements of his probation. He moved out of state; went to college; earned his degree; and landed a good job at a medium sized company in a big city.

When we spoke, there was fear in his now-35 year old voice, which tremored as he tried to search for answers about what happened over 20 years ago. He was 13 years old. His memory of that time is foggy, and spotty. His family was struggling; his parents were going through a divorce; his mother was raising him alone, while working long hours to save up money for their own place. His sisters provided support, but even they were reeling from the family tumult, and their support was limited by their young ages. He had a problem—a huge problem. He did not know where to turn.

Admittedly, when I heard his story, I was skeptical. It’s fairly common for clients to leave out critical details from their cases in order to paint themselves in a more positive light. This is human nature. We try to present ourselves as our best-possible selves, not our worst. I told him that I would do everything I could to help him, including:

Ultimately, we discovered a 22 year old court record, buried in obscurity. It was a judgment of sentence. It was silent on the issue of whether he was informed by his probation agent that he had to register as a sex offender for the next 25 years. We asked the prosecutor for more information. We suspected that he was never advised of his obligation to register. After several adjournments and communications with the prosecutor, the paperwork came back from the state. A document, which is initialed, line by line, and signed by every defendant who is responsible for registration—was missing. It did not exist. And the case was dismissed. Justice was served. The prosecutors could not have been nicer or more understanding of the problem. They don’t get enough credit when they do the right thing and dismiss the case.

In conclusion, we need our lawyer to dig, scratch, and claw. Most importantly, we need a lawyer who can tell our story, and convince the power person—the prosecutor or the judge—in the justness of our cause. 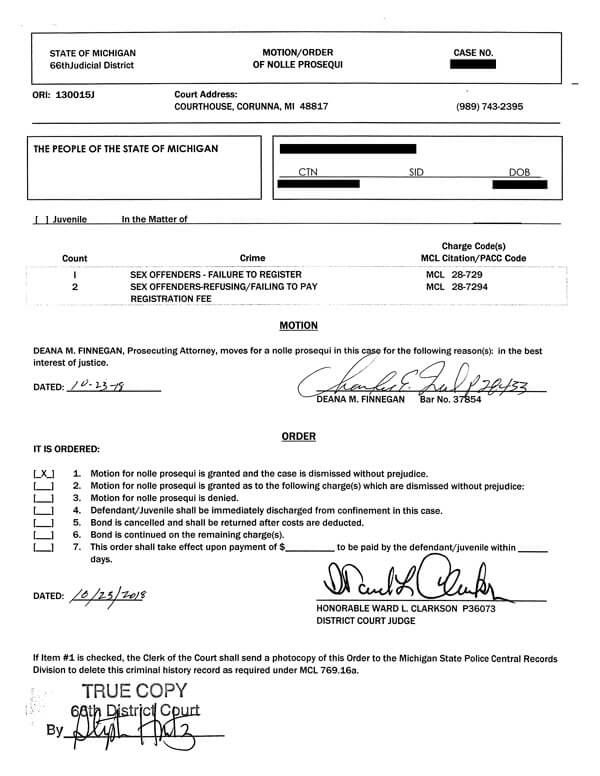