Together, OUR voice cannot be defeated

Not only is Patrick William O’Keefe the sole board certified attorney in the Lansing area, he is also one of only two board certified trial attorneys in the State of Michigan.

If you are searching for the best trial attorney, certification and experience reign supreme. Why? The answer is simple. Attorney Patrick William O’Keefe has earned his stripes through rigorous training and years of experience in the courtroom. Nobody has a greater ability than attorney Patrick William O’Keefe to get results for their clients both inside and outside of the courtroom.

Attorney O’Keefe is also a contributing author with the Institute for Continuing Legal Education on commentary to Michigan’s Model Jury Instructions. Specifically, Mr. O’Keefe wrote the commentary for the jury instructions on Home Invasion, Breaking and Entering, and all “Attempted” Crimes. Attorney O’Keefe was consulted by ICLE for one, very good reason: he has the practical knowledge that comes from trying these types of trials. Above all, Experience Matters Most.

If you contact just one attorney, you must contact board-certified attorney Patrick William O’Keefe today. Remember, it is never too early to hire the right attorney, but it could be too late. 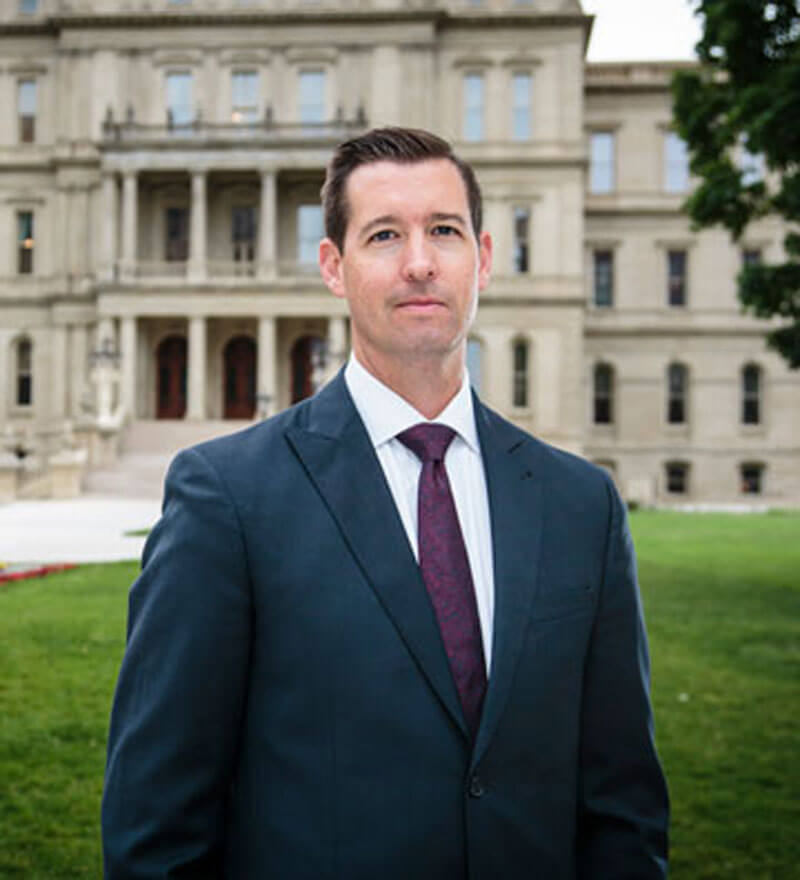 Board Certified Criminal Trial Specialist through the National Board of Trial Advocacy (visit nblsc.us to find a board-certified attorney in your area).

Respected by judges, prosecutors, defense attorneys, police officers, and court staff for being one of the best trial attorneys in Michigan.

Achieved recertification as a criminal trial law advocate – Certified by The National Board of Trial Advocacy (NBTA)
Patrick O’Keefe is part of a growing number of trial attorneys that have illustrated their commitment to bettering the legal profession by successfully completing a rigorous application process and providing the consumer of legal services with an objective measure by which to choose qualified and experienced legal counsel.

Quickly distinguished himself as an attorney who gets outstanding results for his clients and received numerous not guilty verdicts and dismissals.

Served as an Assistant Prosecutor in the Ingham County Prosecutor’s Office, where he earned a reputation as one of the best trial lawyers in Michigan.

Served as an Assistant Prosecutor in Kent County under prosecutor Bill Forsyth – quickly earned a reputation as a talented trial attorney.

Graduated from University of Notre Dame – lettered twice in baseball and was member of two conference championship teams.

All-State in and third team All-American in baseball.

What makes me qualified?

Patrick William O’Keefe is an experienced Lansing criminal defense attorney. Nobody in the State of Michigan has a better reputation or received better results for his clients than Mr. O’Keefe. There is not a better criminal trial lawyer around.

Attorney O’Keefe has tried hundreds of jury trials over the course of his career. He is also experienced in handling appeals in the Michigan Court of Appeals. Mr. O’Keefe is known best as a relentless advocate for his clients who is willing to fight to the end to secure justice. Attorney O’Keefe is also known to have a stellar reputation with the judges, prosecutors, fellow attorneys, and most especially, with his clients. Read some of the testimonials to find out more.

If you or a loved one is charged or suspected of a crime, contact board certified Lansing criminal defense attorney Patrick William O’Keefe. Mr. O’Keefe handles criminal cases all over the state. No case is too big or too small. You name the charge, he’s tried it. Results matter. Attorney O’Keefe is committed to doing whatever it takes to get the best results possible for his clients.

It can be difficult and downright overwhelming sifting through the scores of internet ads, trying to find the right criminal defense attorney for you. If you have already hired an attorney, are they representing you in their full exploding capacity? Are they a specialist in their chosen field, or do they seem like a jack-of-all-trades, master of none? Attorney O’Keefe has earned a reputation as one of the most powerful and influential trial lawyers in Michigan. Where does this power and influence come from? It comes from caring; caring for his clients, and caring for their families. You can rest assured that if Patrick William O’Keefe is chosen as your lawyer, he will stop at nothing to ensure you get the best result possible for you. He will explain ALL your options, including the pros and cons of pleading guilty or going to trial. If you consult Mr. O’Keefe early enough, he will even work tirelessly to see that you are never charged with a crime in the first place.

After handling hundreds of trials, motions, and appeals, Attorney O’Keefe has seen far too many people who gave up important constitutional rights because of bad advice from their attorneys or because they were told not to fight. He has seen far too many people who were pressured by judges, prosecutors, and even their own defense attorney to plead guilty because the stakes were too high, the judge wanted to go on vacation, or the docket was overflowing with cases and their case needed to be disposed of quickly. The constitutional rights to a trial by jury, to remain silent, and to force the prosecution to prove their case beyond a reasonable doubt, are the biggest and most powerful weapons in your arsenal. Mr. O’Keefe is a lawyer who understands how to use those weapons to your advantage.

Attorney O’Keefe recognizes that many lawyers are afraid to sacrifice their dignity, their pride,
and even their reputations for the sake of their clients.

Far too often, persons accused of a crime have suffered at the hands of timid, lazy, or ignorant attorneys who are too afraid to fight for their clients in the face of a judge or prosecutor who is being unfair. It is true that most judges care deeply about the constitution and the protections it affords us. However, many judges have lost sight of these protections. Mr. O’Keefe believes strongly that every person accused of a crime, no matter how serious the offense, deserves to be treated with dignity and respect by the criminal justice system. Attorney O’Keefe is committed to giving his clients the respect and fair treatment they deserve, both in and out of court.

Attorney O’Keefe is not just a master trial lawyer. In addition to his professional interests, Mr. O’Keefe is a devout family man and an active member of the greater Lansing community. He possesses immeasurable skills and a charisma that is unmatched both in and out of the courtroom. Simply stated, he cannot be outworked.